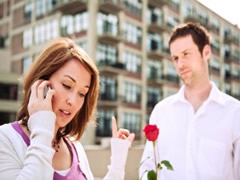 Perfection is a joke. Yes, nothing is 100% perfect. Therefore, sugar daddy dating also includes some imperfections. That being said, these typical problems can be solved if you want to.

A typical problem in the sugar bowl is though terms and conditions have been set up, feelings can change. For example, Ann is a 23-year-old sugar baby dating a 39-year-old sugar daddy Jack. In the beginning, Jack told her that it is a confidential arrangement, so their relationship can't go public. Two years later, Ann is so in love with Jack that she wants to become his official girlfriend. However, Jack doesn't want a traditional relationship, so Ann is very disappointed, although Ann and Jack both know their terms and conditions from the start. Thus, sugar babies and sugar daddies would be well-advised to clarify what would happen if their feelings change later – these should also be included in their terms and conditions.

Some sugar daddies are married.

Frankly, at least 50% of sugar daddies are married men because rich men are usually not single. In this case, if a sugar baby is dating a married man, their affair might be revealed. For instance, his clothes may have her perfume; his shirt may have her lipstick; his bank statement may suggest that he is paying someone regularly (that's the allowance for his sugar baby) & his wife may have a look at his bank statement at home. Well, a life strategist has provided some solutions in this regard: 1) When a sugar daddy has a date with a sugar baby, they should go to a hotel where the sugar daddy can have a shower in the end. The sugar daddy must bring a soap that is the same as the soap in his house, e.g. if his house has a Dove soap in the bathroom, he should keep a Dove soap in his suitcase so that he can use this soap in the shower of the hotel room before ending the date. 2) Think Don Draper – he always keeps many white shirts in his drawer in the office. In this way, if a lover leaves her lipstick on his shirt, he can easily change his shirt in the office immediately. No wonder Betty Draper couldn't find any evidence of his infidelity. 3) Smart sugar daddies only give their sugar babies cash as allowance. That means instead of transferring money to a sugar baby's bank account, a sugar daddy should give her cash, e.g. at the end of each week, he gives her an envelope which has $1000 in it. Therefore, his bank statement wouldn't indicate what's happened.

Some sugar daddies don't want to use condoms.

Statistics show that condoms are less commonly used in arrangements because generous men in arrangements think that they have given these women allowance already – they deserve intimacy without condoms. Owen Cook (founder of Real Social Dynamics) once said, "I hate using condoms. Having sexual intercourse with a condom on is just like eating a salad with the plastic bag. I don't enjoy using condoms because I actually use them." Obviously, Owen Cook isn't dating a sugar baby and he even states that sugar daddy dating sites pose a real threat to his coaching business (he teaches men how to get laid), as rich men can easily get hot women by joining a sugar daddy dating website without hiring him as a dating coach nowadays. Oh, where are we? Ah, yes – some sugar daddies refuse to use condoms. Well, in this case, the man and the woman can do an STD test together and make sure it is an exclusive relationship, and then the woman can use pills instead.

Many sugar babies think an arrangement is a transaction.

According to my observation, a lot of sugar daddies are jaded because they have met many sugar babies who think an arrangement is simply a transaction. As a matter of fact, an arrangement is also a relationship, meaning this is a genuine connection between a man and a woman. Hence, sugar babies should know that a large number of sugar daddies actually look forward to an emotional connection as well.